Be cool my babies… 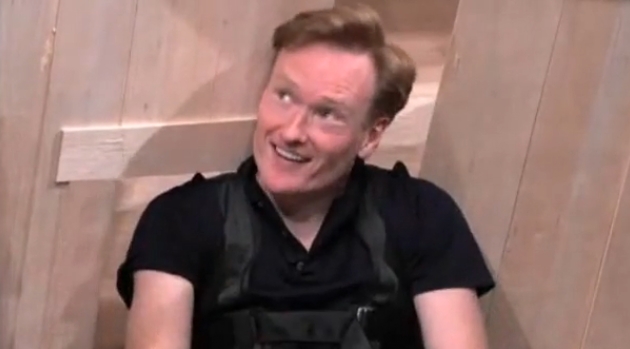 Hopefully I didn’t show it, but this was a seriously extremely stressful moment for me.  For my appearances on former Tonight Show with Conan O’Brien, Conan and I didn’t spend much rehearsal on our opening stunt bits and interaction so it would all be organic and fresh for the actual taping.

But the “main stunt” would always require rehearsal for obvious safety and insurance reasons. Rehearsal would start around 3pm and the actual taping would go at 5pm.  So it’s all pretty run and gun after lunch with no cushion for error.

On this particular episode our “main stunt” was sliding Conan on his butt with the use of a high-powered wench pulling him through a cornucopia of funny props that Conan had specified (picket fence, chicken coop, guys walking with mirror, and giant bowling pin).  As usual, I ran through this with my stunt crew the night before and everything was completely copacetic.

However, on the actual day we ran into major computer problems.  The wench is operated by a laptop…and the laptop kept freezing on us.  Of course this didn’t happen until Conan and his entire staff of writers and producers showed up for rehearsal…along with cameras rolling.

But Coco kept his cool and no one really freaked out (on the outside at least) although there was a very solid chance that the bit was about to be canceled. We got it to work once in rehearsal….and left it at that.

I assured everyone that we’d have the system figured out by showtime, and Conan and company decided to keep it on the books.  But literally until the moment that I yelled action on the actual show, I had no idea if it was going to work or not.

Here’s some rare behind the scenes footage that Aaron Bleyaert had put up on his Tonight Show blog.  There’s also footage somewhere in a hardrive of Aaron wearing a football helmet and me spin kicking him in the head…I hope that didn’t end up in NBC possession because Aaron sacrificed his neck for that shot.

You can also catch more behind the scenes on the ConanVids youtube channel.  Not sure how long they’ll be up there for…so get em while they’re hot.

I’ll work on getting the actual show footage up here or on my Facebook page shortly.