The urumi (Malayalam: ഉറുമി) or Surul Pattai (Tamil) or Aara (Hindi) is a long sword made of flexible steel, sharp enough to cut into flesh, but flexible enough to be rolled into a tight coil. It was used and still can be found in Kerala, Rajasthan and Punjab, and is one of the weapons learned by practitioners of the martial art of Kalaripayattu, Varma Kalai, Kuttu Varisai and Sikh martial arts Gatka. It was most popular in the North Malabar Coast of Kerala state, India, and is often mentioned in the ballads of the region.

The flexible sword is called Urumi in the Northern System of Kalaripayattu and Chuttuval in the Southern System. The word Chuttuval is derived from the Malayalam words Chuttu (coil/spin) and Vaal (sword) and means Coiled Sword, a very apt description of the way the sword is maneuvered by the swordsman. Since the sword is flexible, and worn curled around the waist or bundled into the belt, it has to be straightened out, which is generated by turning it around the wielder’s body mostly in a vertical plane. Urumi is still practiced in all kalaris.

The sword is a flexible band of steel three-quarters to one inch in width, and long enough to reach from the fingertip of one hand to the finger tip of the other hand when the hands are held outstretched, (usually about four or five and a half feet). It has a small handle with a cover. Often there are Urumis with multiple belts on a single handle, which makes it more dangerous to the opponents and wielders alike. In modern times it is often made from used Band-saw blade. 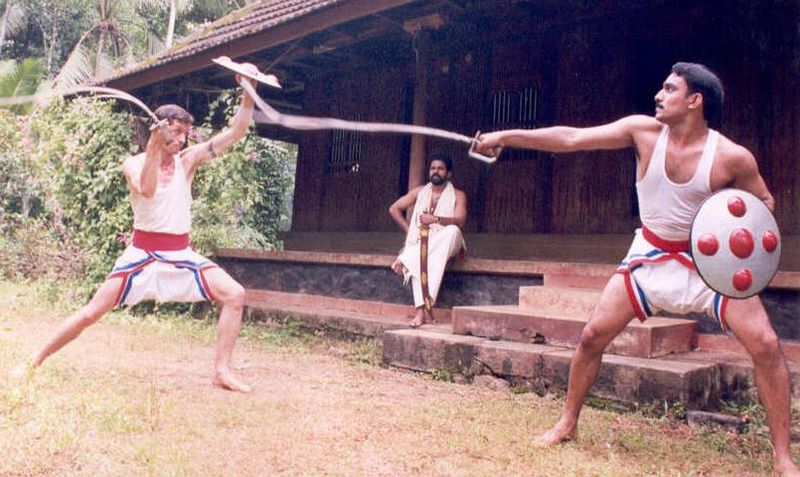 Agility and skill are more important to a mastery of the weapon than strength or aggression. Twirling and controlling the urumi is a difficult and dangerous art, and is therefore taught only to the best pupils of the Kalari and Gatka. Incorrect use can result in the flexible sword wounding its wielder, and great concentration is required during use, even by experts.

The Urumi is most useful to a warrior when he is alone and has to fight multiple opponents. The Urumi can be worn like a waist belt and therefore can be carried inconspicuously and without great inconvenience. Since women often wore belts, the Urumi was a convenient weapon for them to carry, worn around the waist. Unniarcha, one of the heroines of the ballads of the Northern Malabar coast, was said to have been adept at wielding the Urumi. It was also a good weapon for duels since thrusting with the point of the sword was not permitted in duels in South India.