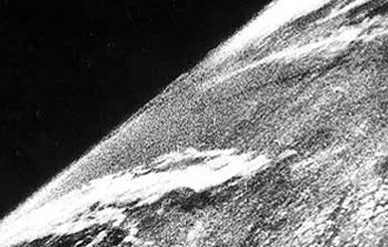 On October 24, 1946, not long after the end of World War II and years before the Sputnik satellite opened the space age, a group of soldiers and scientists in the New Mexico desert saw something new and wonderful—the first pictures of Earth as seen from space.

The grainy, black-and-white photos were taken from an altitude of 65 miles by a 35-millimeter motion picture camera riding on a V-2 missile launched from the White Sands Missile Range. Snapping a new frame every second and a half, the rocket-borne camera climbed straight up, then fell back to Earth minutes later, slamming into the ground at 500 feet per second. The camera itself was smashed, but the film, protected in a steel cassette, was unharmed.