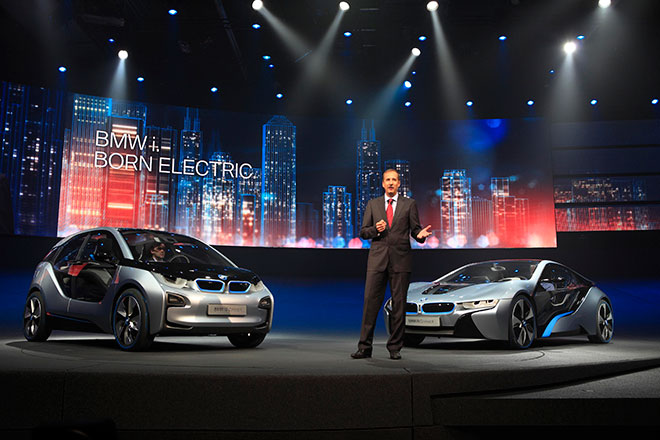 BMW has provided a glimpse of its electric future with the unveiling of two electric concepts, the first to come from its e-mobility division.

Although the cars are conceptual studies that probably won’t see production, they provide the best view yet of the electric i3 and plug-in hybrid i8 models the company promises to deliver within three years. They also suggest the German automaker is serious about launching “BMW i” electric vehicle brand.

“We are marking another milestone in the history of the BMW Group,” Norbert Reithofer, board chairman, said as the cars were unveiled Friday in Frankfurt. “As chairman of the board and an engineer myself, I am very proud of this project.”

The i3 and i8 take e-mobility in two different directions. The i3 (concept shown above) is an urban commuter to challenge cars like the forthcoming Mitsubishi i and Smart ForTwo Electric Drive. BMW says the four-seater will have a range of 150 kilometers (93 miles) and a 125 kilowatt (167 horsepower) motor driving the rear wheels. The body is made largely of carbon fiber-reinforced plastic to minimize weight while ensuring a high level of safety.

BMW claims a zero to 60 time of “less than eight seconds.” No battery specs and no word on how long it’ll take to charge, but BMW says, “a high-speed charger achieves an 80 percent battery charge in just an hour.” 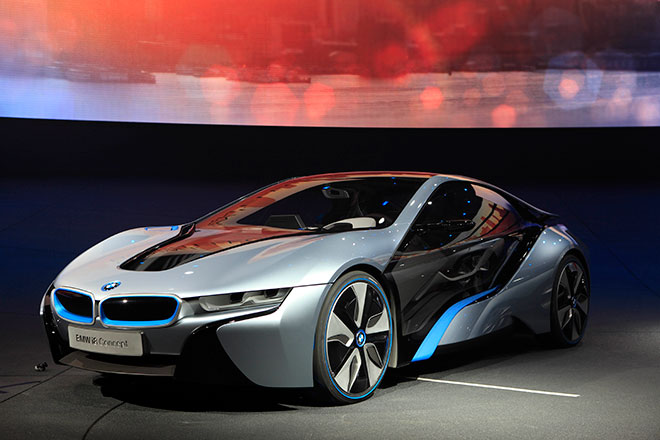 If the i3 is aimed at urban commuting, the i8 (shown above) is an autobahn burner akin to the Audi R8 eTron and Mercedes-Benz AMG SLS E-Cell. The Germans are pulling out the stops in the electric sports car arena, and BMW clearly doesn’t want to be left behind.

“The BMW i8 Concept is the sports car for a new generation: Pure, emotional and sustainable,” said Klaus Draeger, the board member responsible for vehicle development.

To that end, i8 — which looks a bit like the 6-Series — features an all-wheel drive system with a total of 349 horsepower and 405 pound-feet of torque. That may not sound like much when you consider the SLS E-Cell promises 525 horsepower, but extensive use of carbon fiber-reinforced plastic keeps the weight to 1,480 kilograms (3,262 pounds).

The i3 and i8 join the Mini E and Active E electric 1-Series in BMW’s e-lineup, and they are the first BMWs designed from the ground up for e-drive. They’re also the first projects from the BMW i brand, which in addition to electric vehicles will provide intelligent navigation, vehicle connectivity and other services.

The “i” brand was born of Project i, a team BMW created three years ago to explore the future of transportation. It is the centerpiece of the company’s campaign to develop alternative drivetrains and ecofriendlier cars.