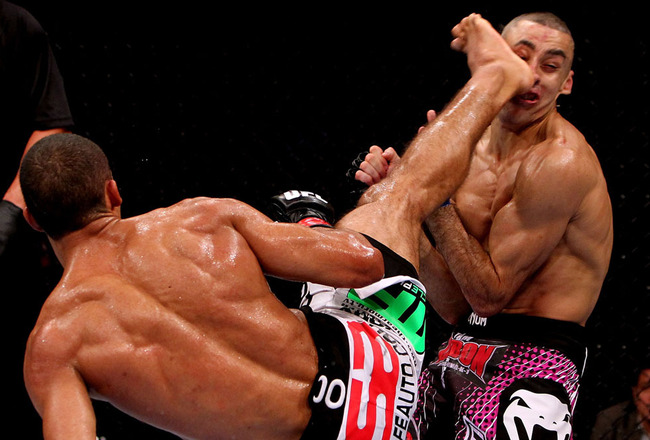 It is rare that the topic of “Knockout of the Year” would be brought up just 14 days into the new year, but thanks to Edson Barboza’s wheel kick finish of Terry Etim at UFC 142, the discussion is legitimate.

Barboza’s flashy striking has propelled the 155-pound Brazilian native to an undefeated record of 10-0 in MMA, with seven knockouts. Coupled with his 25-3 kickboxing resume (that includes 22 more knockouts) Barboza is easily the most dangerous striker in the lightweight division.

After he chopped down Mike Lullo with leg kicks in his UFC debut at UFC 123, critics were quick to criticize Barboza’s inability to finish Anthony Njokuani and Ross Pearson in his next two bouts.

With his finish of Etim, Barboza not only silenced those critics, he gave the rest of the MMA world something to remember for years to come. The knockout was the first wheel kick finish in UFC history. Barboza was appropriately rewarded a $65,000 bonus for “Knockout of the Night.”

As Etim’s unconscious body lay on the mat, Barboza put the rest of the division on notice.

Although Barboza’s ground game has yet to be truly tested inside the Octagon, the Brazilian easily escaped the grasp of his British foe on multiple occasions. His use of the butterfly guard to elevate Etim from the top position and return to his feet appeared effortless. Add in the fact that his crisp Muay Thai technique is unmatched by anyone in his weight class, the 25-year-old Barboza is poised to make a run at the lightweight crown.