Davide Luciano and Claudia Ficca are a husband & wife team who have brought their successful “Pothole” photography to Los Angeles.   It was a pleasure (and lots of fun) being a part of this project on the West Coast.  Here is today cover article from yesterdays LA Daily News that can much more eloquently explain this original concept much better than I can… 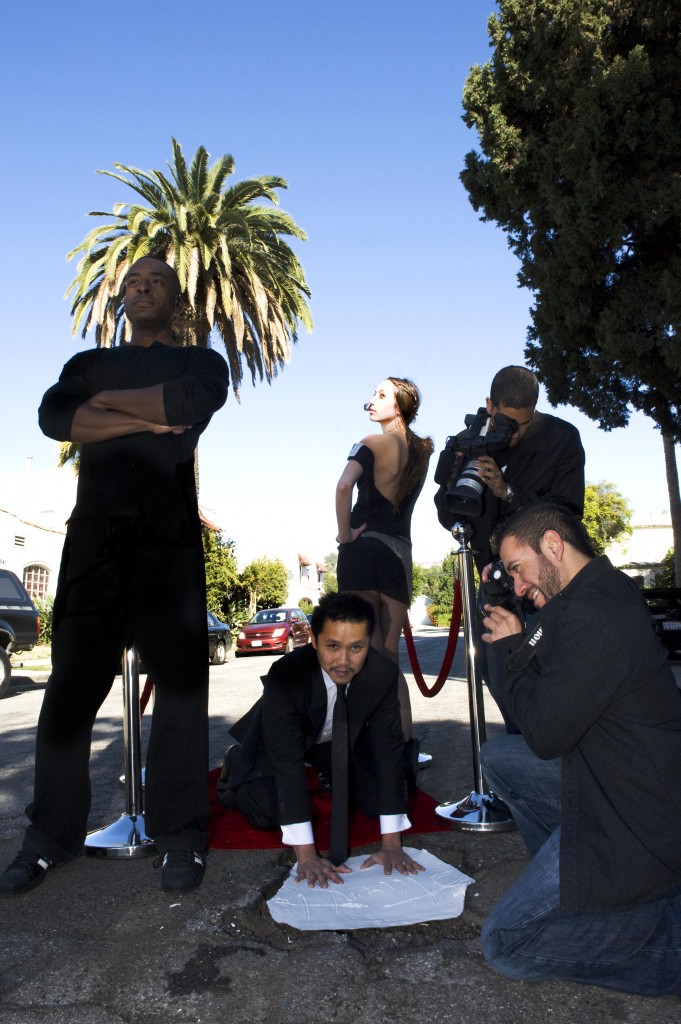 But when the martial arts stud, with three “Tonight Show” appearances, pressed his lightning fingers into cement on Tuesday, it wasn’t on Hollywood Boulevard’s Walk of Fame.

It was inside a lowly Los Angeles pothole.

“OK, we’ll have one paparazzo in front, let’s shoot it,” photographer Davide Luciano, 31, said to his wife and partner, Claudia Ficca, as Ho made his mark in faux cement in a residential pothole in Los Feliz.

The photo shoot was the latest in zany guerilla pothole photographs taken by the Montreal duo who will open a SoHo Photo Gallery exhibit in New York this spring.

Picture a baker frying doughnuts inside a Montreal pothole. A man scooping spaghetti and meatballs from a pothole in New York.

Or a purse pooch being washed inside a notorious L.A. street crater.

It’s about fun. It’s about art. And it’s about capturing a city’s raison d’etre from its lowliest municipal vantage.

“We drove around two hours, and found four really good ones, but this (photo) had a great palm tree in it,” said Ficca, before she shot the Walk of Fame-like scene. “Our eyes are always open.”

“There is definitely an L.A.-ness about the potholes.”

Never mind that the potholes they’ve found since they touched down in L.A. last month

to escape the frigid Montreal winter had the character of pothole fugitives, or even defiant pothole partisans.Since Mayor Antonio Villaraigosa launched his Operation Pothole in 2005, municipal crews filled 1,565,044 potholes as of last month.

The nation’s largest pothole-filling campaign has only 125,973 to go, according to the Mayor’s Office. And that doesn’t include the fire engine-size sinkholes.

But for some Angelenos, one pothole is one too many.

“Potholes have become the obstacle course in Los Angeles,” said Paul-Brian McReynolds, a health and fitness instructor who played the bodyguard in the Ho scene, looking at his 400-horsepower C6 Corvette. “But that sucker has navigation, I don’t need eyes.”

Others thought L.A. potholes exist solely to boost local car repairs. L.A. drivers pay $746 annually for wear-and-tear to their vehicles, a recent national report found. And they file about 500,000 auto insurance claims for pothole-related repairs, according to the Mayor’s Office.

“I bought my car, a brand new Mercedes – it now handles like a shopping cart,” said Patrick Srail, a Sony engineer who played the scene’s paparazzo. “Every time I drive through a pothole, there goes another $6 in resale value.”

But if they think sunny California potholes are bad, try motoring through the Canadian Great White North.

Luciano, a film school grad, and Ficca, a graduate in Italian studies, were tooling through Montreal when the tail of their VW sank into a humongous pothole. The cost to fix it: $600 Canadian.

So one of them (they can’t remember who) asked, Wouldn’t it be funny to see a woman washing clothes in a pothole. So they staged a scene, and the “Potholes” project was born.

After getting married last summer, they cashed in their savings from restaurant and nightclub work and hit the road in search of the asphalt holy grail.

They’ve shot 13 pothole scenes in Montreal, one in New York, and plan five in L.A – including a Pamela Anderson look-alike performing a “Baywatch”-style rescue from a pothole.

Potholes permitting, they hope to drive across North America next year to shoot enough pothole scenes to fill a coffee-table edition.

But it was while flying into Los Angeles last month that a passenger informed them there were “no potholes in L.A.”

“They’re everywhere,” said Ficca, 28, pointing to the nearly 2-foot wide pothole on a quiet residential street in sight of Griffith Observatory. “For some reason, L.A. potholes are square, or rectangular.

“See what I mean? This is the classic L.A. pothole.”

Ficca and Luciano said they are inspired by each city and its notorious holes – given useful purpose by each quickly staged photo.

“This is a Walk of Fame, but I don’t think I’ve arrived,” said Ho, in a black suit and tie, standing by his hole. “I hope this isn’t it.”