As gallery interest in street art grows (MOCA’s major exhibition, Art in the Streets, is on now), the debate continues over what street art is and how it affects communities

Los Angeles Magazine asked a street artist, the LAPD, the executive director of Los Angeles’s Department of Cultural Affairs, and a local art history professor to weigh in: 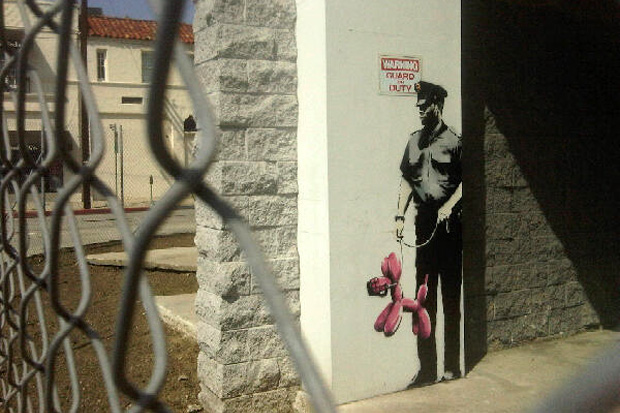 If you have something on your chest and in your heart and you want everyone to hear it, the street is a very good megaphone for that. There are poets, sculptors, and painters inside all of us. If you listen to the call, act on it, and share it in the public sphere—that to me is “street art.” Bad or good, good or bad, people will love it or hate it.

The fact that you have the balls to take the wall and communicate your fire is what I have respect for. Those who see it as vandalism should take note of where most of the street art/graffiti is being painted. It’s not on cars or operational businesses and homes; it’s on force-fed billboards, run-down for-lease spaces, and eyesore electrical boxes. There is power in the act, the aesthetic, and the message. You can affect things. You just will.

So that becomes problematic for the police department, and we have to investigate that.

Recently we had an issue come up regarding street art that has never really raised its head before. We responded to a call about what appeared to be an apple hanging from a tree on 1st Street, east of Alameda near the Gold Line train station. An ex-marine walked by and saw what looked to be an apple hanging from a string, and he noticed the top looked like the top of a hand grenade. He realized, Oh, my God, that might be something disguised, and we called in the bomb squad. Hundreds of man-hours later, it ended up being a piece of Styrofoam with the top of a real hand grenade.

I researched it the next day and found out that the apple was street art hung there by an artist, and several Web sites were mocking us for responding and not recognizing it for what it is. When street art resembles weapons in the days of terrorism, we have a huge problem.

Here’s the potential threat something like that gives to the city: Should the police become climatized to the idea that it’s street art, so should we just ignore it? Or do we continue to respond to these situations even though they’re probably not a threat, because we have to make sure terrorists aren’t using street art and it becomes a trend? The shocking thing and scary thing about this is a terrorist could now try to hide a bomb in plain sight under the guise of street art. So we have to respond in spite of the mocking, in spite of what the artists think. That means taking the police department away from other crime and investigating other threats, all because someone wants to express himself or herself in public. In that way, street art can present significant danger to the city. And that probably costs thousands of dollars for the city when we don’t have enough money to budget for police.

If someone starts throwing up slap tags in your neighborhood or on the street where you live, near the house that you are trying to sell, how does that affect you? Doing that is the hype of ego. It’s the hype of narcissism.

How does street art affect Los Angeles? In its broadest sense, street art can encompass a remarkable diversity in message, style, materials, and community involvement in the creative process. The art of the streets, whether traditional murals, aerosol graffiti-style works, paper handbills, or other forms, can express the concerns, cultural icons, and celebrations shared by a community. It also has the ability to expose divergent aesthetic perspectives and social tensions within and between communities.

Los Angeles is incredibly heterogeneous in all aspects of society. Within this unique urban environment, the diverse interests of the city, residents, property owners, artists, and other community stakeholders converge in impassioned dialogue over visual space. There is a continuous debate over the rights of the individual, private entities, and government over the control of the public realm. Los Angeles also has a long history of artist and community expression through art and mark making, whether officially sanctioned, created with owner permission, or illegally applied.

There are few easy answers to these concerns, but it is a testament to L.A. and its people that this debate can happen in a civil, thought-provoking manner. Recently questions about the nature, appropriateness, and role of street art have made headlines and broadened this discourse. It is in this role as a catalyst for conversation about these issues—and, at its core, recognition of our values and desires for our visual landscape—that street art can have its greatest impact.

What makes street art “art”? The most basic and obvious answer is that it occupies a street or a part of one. The difficulty comes in when you try to specify what you mean by “it” (art), whether occupying or inhabiting a street or a living room or a gallery or a shopping mall. The most fundamental point is that art is not what you think it is, because, essentially, it is not an “it” at all but a way of using things—potentially any things, including your own and other’s bodies. The term “street art” is basically meaningless except as a marketing strategy to call attention to something as artistically intended in public or civic space. But then anything in civic space potentially has artistic or aesthetic uses, either by intention or by how it is attended to, how it is construed under certain conditions. Which is yet another essential factor about the subject: Anything (an object, event, or phenomenon of any material or virtual kind) can serve aesthetic or artistic functions at certain times and under given conditions. So art is not only not a what but a when, and it’s also a how, a way of approaching or using objects or phenomena of any kind.

So the question “What makes street art ‘art,’ ” which on the surface seems to beg for an answer about what kind of thing street art may be—that is, what kind of art is art for the street, is an extremely important one, and in fact it opens up and challenges some of our most basic ideas about what art in general is or should be. And it raises the fact that basically, art is a problem and may be an exceedingly troublesome issue for a community. Art is in fact dangerous, even terror inducing. The earliest documented text we have that extensively discusses the nature of the relations between art and social or civic life, Plato’s Republic (Politeia), written 2,500 years ago, argues strongly that art in public spaces should be banished from the city because it adversely affects the souls and mental equilibrium of citizens, potentially causing them to think otherwise from what those holding or desiring power would want them to believe is natural, real, or true. The logic of all this is very basic and fundamental: Once something (anything) is put into public or civic space, how it may be received or used is simply not controllable by the object’s makers, producers, sponsors, or patrons without external management, without a guide as to what to believe about what this intervention into civic space means(or should mean).

So the whole question about what street art “is” (as art) is a question that goes straight to the heart of the oldest, deepest, and perennially unresolvable questions about the arts, troubling notions of art imagined as a kind of thing rather than a way of using (any) things. At the same time, it goes to the heart of the problem of the connections and distinctions between art and religion, because both share the quality of being complementary and (to some) antithetical approaches to the problem of representation, or how things mean, rather than being independent “things” in and of themselves. Religion, like art, is primarily a when and a howrather than a what. Perhaps that is an issue for another City Think column.