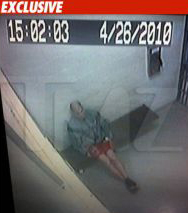 The photograph is of a monitor screen showing Ortiz sitting in the jail Monday after he was arrested on suspicion of felony domestic violence, said police spokesman Lt. Russell Reinhart.

“It was released without authorization by a department employee,” Reinhart said. “We are handling it as an internal personnel matter.”

TMZ officials declined to say who gave them the photo.

“TMZ may not comment on the source of any story it publishes,” publicist Nicole Fertile wrote in an e-mail to the Orange County Register.

Ortiz later said during a news conference that Jameson suffered a drug addiction relapse and he would never hurt her. Jameson denied the allegations saying he threw her into a bathtub and she suffered two torn ligaments in her shoulder, TMZ reported.

Ortiz was prohibited from returning to the couple’s home because of an emergency protective order against him that will last about seven days, police said.

Ortiz was charged with four misdemeanor charges in 1998 of battery with serious bodily injury, assault with a deadly weapon other than a firearm, battery, and assault, according to Orange County Superior Court records.

He pleaded not guilty to three of the charges and pleaded guilty in 1999 to battery with serious bodily injury. He was sentenced to three years probation, 29 days in jail, 232 hours of community services, records show.